What Kings Ate and Wizards Drank 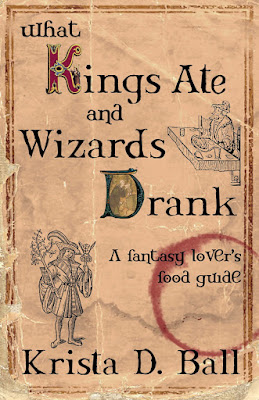 How important is the accurate portrayal of food in historical fiction? Do you ever trip over a detail which takes you out of the enjoyable rhythm of a story—such as knowing there’s no way a potato would find its way into an Irish stew until well after Sir Walter Raleigh’s voyage to the New World? If you are a writer, what steps do you take to avoid anachronisms?

There are a few essential books for every writer’s shelf: for me, it’s been the Chicago Manual of Style, Roget’s Thesaurus (which was recently supplemented with Powerthesaurus.org, my new favorite resource), and a legion of history books. A subset of those history books has expanded greatly over the years, and they all have to do with food. A recent addition was What Kings Ate and Wizards Drank: A fantasy Lover’s Food Guide, which I learned about through author Krista Ball’s guest post on David Gaughran’s blog. I was hooked.

Krista Ball addresses many important facets of world history and asks writers to consider using them to make their stories more authentic. Food riots stemming from extreme inequality is a main feature of her argument, as is the harsh punishments visited upon hunters who poach or even tread upon royal land (accounting for “common rights,” during which English farmers could let their pigs feed on acorns during autumn). She also called for more variety in the open markets, citing the difference between what would be available in Thailand, North America, and the Middle East.

There’s a wealth of information packed into this 250-page book. Among the most interesting facts:

Several excellent resources were suggested for further research: from al-Baghdadi’s Book of Dishes (1225) and The Forme of Cury, compiled by the master-cooks of Richard II in 1390. Krista Ball also goes through the detail process of planning for a massive royal feast, which takes place months in advance. It’s one of the more fascinating sections within the appendix. One of the key take-aways from the book is how much food culture can change through influences of trade and war—showing how a culture’s cuisine can change through outside influences provides a lot of potential for writers. What Kings Ate and Wizards Drank is a wonderful guide that offers great details on food in fiction and inspires the reader to search for more. When I first read it, I left a review on Goodreads pining for more—and was surprised to receive a note from the author that a sequel is in the works. I look forward to seeing what comes of it.