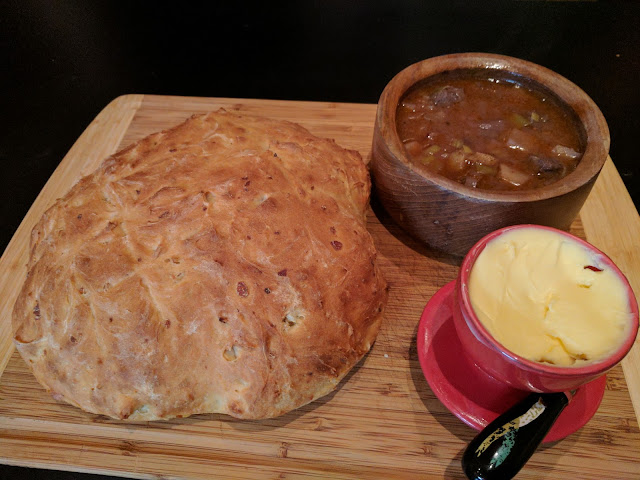 With the remastered release of Skyrim last fall, I found myself lured back to one of my favorite series of all time. Daggerfall was my first Elder Scrolls game, back when I got my first computer in 1996(!). While Morrowind will always hold a special place in my heart as the star of the Elder Scrolls stories, the open world of Skyrim is fascinating not only for its branched questlines, but also for the mundane daily activities that can fill a character’s time.

I bought the original edition in November 2011, but didn’t install it because I was starting my first NaNoWriMo project, trying to bring my third novel into good form. The statue of Alduin the World-Eater stood on a shelf over my desk to encourage me to exceed my daily word count goal so I could delve in and see what awaited me in Skyrim. When I finally got around to playing, a friend advised me to build up my blacksmithing skills ASAP—oh, and go mine your own ore. The second recommendation—cook your own food. It’s a nice break between quests to sit back in-game and strategize for the next quests.

In the years since Skyrim’s release, a number of bloggers have reproduced honey nuts treats and the infamous sweet rolls. (Anyone else ever use their thu’um to fus-ro-dah one of those snarky guards?)

Personally, I’m much more into cooking savory foods. There is a running list of recipes from the game I’ve always wanted to try, so I’m kicking off an occasional series about the meals of Skyrim. After procuring some venison from a local meat shop, I settled in on a snowy weekend and made stew with a loaf of potato bread (possible with the Hearthfire mod, or, if you go way back to Oblivion, as part of a visit to the Faregyl Inn in Cyrodiil). 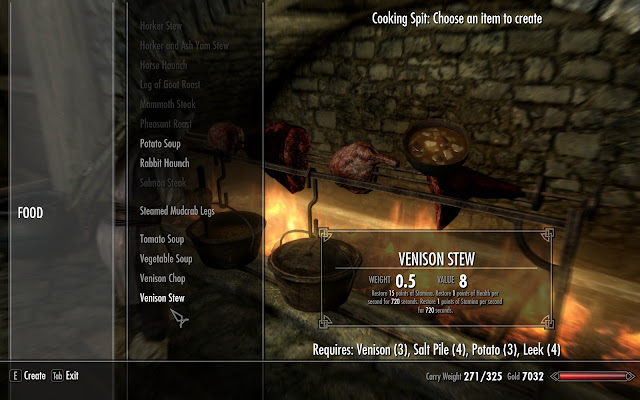 The bread came out surprisingly fluffy and was a delight. Because venison wasn’t in season I settled for frozen, but would happily revisit this recipe again to get some fresh loin when it’s available.

Cur venison into 1 to 2-inch chunks and brown in a skillet, set aside. Melt butter in stock pot, add leeks and garlic and simmer until caramelized, approximately 25 minutes. Add flour and stir until it thickens. Add wine and simmer another ten minutes. Add meat to stock pot, add rest of ingredients and top off with stock, simmer on low for another hour before serving. Serve with fresh bread.

Potato Bread
1 large potato
1 egg (or egg substitute)
2 tablespoons butter
1 tablespoon honey
1 ½ teaspoon salt
4 cups flour
Approx. 2 cups of water
1 packet of yeast
½ teaspoon saffron threads
Peel and boil the potato until soft. Mash and let cool. In large bowl, activate the yeast. Add flour, crumble saffron into the mixture, add salt. Melt butter, mix into dry ingredients with honey, mashed potato, and egg. Knead for ten minutes, adding flour or water as necessary. Cover bowl and let rise for 90 minutes. Punch down, let rise for another hour or until doubled in size. Preheat oven to 400 degrees Fahrenheit. Punch down dough again; shape it into a large round on a buttered pan. Just before placing in oven, score the top of the loaf with a knife. Bake for 30 minutes until golden brown and knocking on the top sounds hollow. (I typically keep a bamboo skewer on hand to inset into the loaf to ensure the inside is cooked enough. If it comes out wet and clumpy, keep in the oven for a bit more.) Serve with your favorite butter. 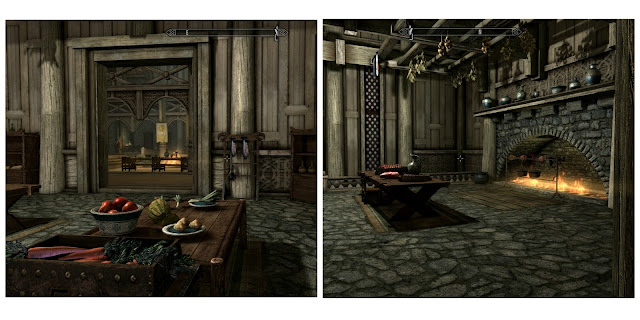 Special thanks to Jarl Balgruuf for use of the Dragonsreach kitchen in Whiterun. And now, for more sweet rolls.